Rocky Linux installs like every other RHEL 8-based OS, just with different graphics.  If you’re a pro at installing CentOS 8 from all those migrations you did, then Rocky Linux will be just as easy for you! The only thing I’ve noticed missing, is a way to to migrate from CentOS 7 or CentOS 8 to Rocky Linux. AlmaLinux has had a migration script for their entire beta period. That script helped me transform many of my CentOS 8 machines to AlmaLinux.

Once Rocky Linux is installed, you’re greeted with a well designed console. I never knew a console could really look this good! 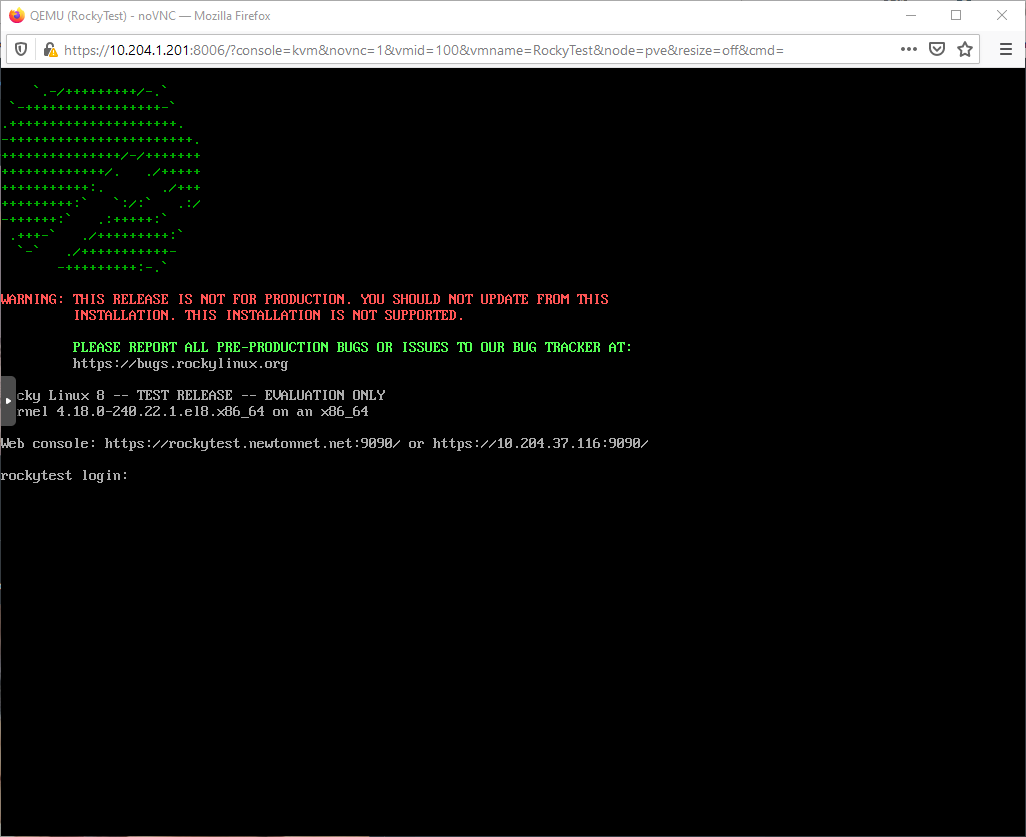 I really hope the logo stays in the final build!

In my tests, which so far have been just installing and using web software, have all been successful. Webmin installs no problem. Running internal websites hasn’t been an issue. Really, the only issues are where software will check what OS it’s running under. If it doesn’t detect Rocky Linux as CentOS or RHEL, you have to hack around any installer scripts. Which may void your warranty.

Overall, I felt like I was on a CentOS 8 system which is the true end goal. After all, the reason why we’re all abandoning CentOS is because we need that RHEL-stability, and Rocky Linux delivers. What was a limited arena for enterprise Linux, I sincerely hope that we get two awesome choices. I’m really hoping we’ll see cPanel also support Rocky Linux in the same way they support AlmaLinux.

If you’re interested in trying out Rocky Linux, you can grab an ISO here. Just keep in mind, it is RC software so you shouldn’t run it in production (but we know the temptation is there and you might just add one server into production – we won’t tell!).

Want to try Rocky Linux in the cloud?

NodeSpace Hosting is in the process of launching a new private cloud server product and is looking for anyone who’d like to help test at discounted prices. Just contact NodeSpace Hosting and mention you’re interested in beta testing the new cloud platform. You’re able to upload and use your own Linux ISO, but NodeSpace has said they will be supporting Rocky Linux. Just ask and you’ll be able to try out Rocky Linux in the cloud for a decent discount – even when the platform launches at the end of May.

How to change your hostname

Configuring a static IP on AlmaLinux